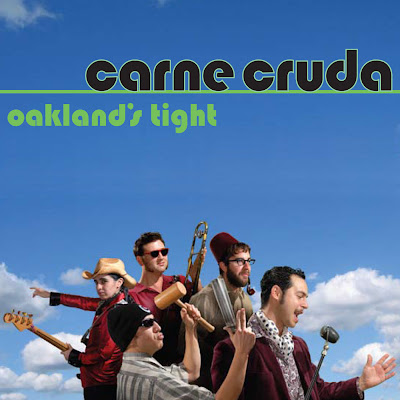 I found a couple of reviews of Carne Cruda's "Oakland's Tight" album, something that I poured an incredible amount of effort into. I'm glad that some people liked it:

Carne Cruda catches the attention before you even hear the music. Just have a look at that cover of Oakland's Tight (Round Whirled Records, 2010). And if you think that's interesting, you should see the inside cover photo which shows all the band members in luchador masks, kind of like a less formal version of Rob Zombie's El Superbeasto.

Then you put the album on and you are greeted by the title track, which is a fusion of ska, jazz, and funk and sings the praises of Oakland. Now, maybe you're wondering how anyone could write an entire song praising Oakland. I can't say. I've never been there. All I know is that it's not a bad thing to be proud of your hometown. Oh, and does your town boast artists like MC Hammer and Too Short? Then perhaps you shouldn't be so quick to criticize Oakland.

The jazz and funk are still present in "Spirit of Carnaval," but as you would imagine, the song also has some heavy South American flavor. The vocals of Dandara Backen are the perfect compliment to the melody, which is sure to get you moving.
The band performs a cover of "Ring of Fire" on this album, which is probably unlike any cover of the song that you have ever heard. Unless you've heard another version of this tune that sounds like Latin ska with shamisen. Yes, you read that correctly. Latin ska with a Japanese twist.

And then there is "Quitate La Mascara." Now I would probably like this song anyway because I have a thing for songs about luchadors (the classic garage song "The Crusher," "Viva del Santo" by Southern Culture on the Skids). But this song is more than a song about a luchador. It's a song about what can happen when a band decides it doesn't want to follow any formula. This song is one part rockabilly (the intro), one part garage (the sax, particularly at the end of the song), one big part Latin funk, and all madness. It's brilliant.

By now, loyal reader, you know that I enjoy bands that don't sound like 40 other artists. If you are like me, you should add Oakland's Tight to your collection. I doubt you have anything quite like this album.

AND ANOTHER ONE at FabrikaLink.com

East Oakland was the place of birth for this peculiar band called Carne Cruda. A band that came together from the mixture of salsa bands, funk groups, cumbia conjuntos, jazz combos, rock power trios along with the fire of the hyphy, norteno and banda beats. Quite a mix huh?

Collaborating with Grammy nominated producer Greg Landau (former guitarist that shared the stage with none other than Silvio Rodríguez, Mercedes Sosa and Pablo Milanés) to create their new album “Oakland’s Tight”. This ambitious and visionary project seeks to shake everyone’s booty, no matter what your genre preference is, literally. I can guarantee that at some point or another you are going to like what you hear. This 12 song album brings is tunes that will take is to Mexico, Brazil, to some sexy island in the Caribbean (remember that when you hear Anachro-Syndicalism). My personal metaphor for this band? A bouncing ball that is all over the place but with a certain charm and interesting twist to it.


Although I am not a huge fan of norteno or banda beats, I do appreciate the risk and ambition that they had to bring us such experimental latin sounds. The production of the album is a clear A+, not to mention the incredible musicianship. Because the members of this band have been part of many other bands, they were able to bring big time guest artist to be part of the album like Omar Sosa (Cuban free-jazz pianist), Dandha da Hora (from the funksters SambaDá). Among my favorite tunes is Ring of Fire, a Johnny Cash all time classic with a Brazilian twist to it. The reason why I enjoy so much this tune is that to me it is amazing how this band’s creativity can extend to bring an oldie, mix it not only with new beats but also put a Brazilian hint to it! Simply BAD-ASS!


This band can make it big time, not only for their huge variety but the amazing creativity they have… oh yeah and I absolutely LOVE the lucha libre mask look on them!