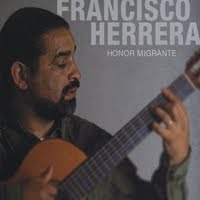 Growing up in the border town of Calexico, Francisco Herrera always straddled two worlds. “My siblings and cousins and I used to sing rancheras and some mariachi at family parties, and when we got a little older we started some garage rock bands,” he recalls of his early musical exploits. But as he became more involved in the church and in particular with the Latin American school of Liberation Theology, Herrera began exploring ways to use music to further his goals of social justice.

Herrera traveled extensively throughout Latin America working with community organizations even as he finished his four years at seminary school, all the while toting his guitar and whipping it out for events, actions, and church meetings. “Reflection, meditation, prayer, all those things are important. But they’re important so you can play a role here to make social change. De ahí nacen all those misas that have a social message.” He deftly weaves between English and Spanish as he explains the philosophy of Liberation Theology as he sits under portraits of his two heroes, Che Guevara and Monseñor Oscar Romero, the Salvadoran archbishop who was assassinated in 1980.

Francisco Herrera’s new album, Honor Migrante, is full of songs that reflect his passion for social justice. The themes range from immigrant rights to globalization, and the music itself crosses genre borders from traditional-sounding norteño and corrido tunes to post-modern electro-cumbia and Latin Rock wet with soulful vocals, wailing electric guitars, and a ripping Fender-Rhodes solo. All these sounds are melded smoothly together by veteran super-producer Greg Landau (Maldita Vecindad, Susana Baca) who met Herrera in the late 1980s on the Nueva Cancion circuit.

Francisco Herrera will be presenting the songs from Honor Migrante with an all-star band at an annual event called Premio Mujer 2010, an award ceremony to honor notable women in the community. Premio Mujer 2010 will be presented at the Events Center at Saint Mary’s Cathedral, 1111 Gough Street in San Francisco on May 22nd at 6pm. More information at: http://www.franciscoherreramusic.com